The Secret's Out: Apple's New iPhone Sales are Rising

This was originally published on news.cmlviz.com

Our purpose is to provide institutional research to all investors and break the information monopoly held by the top .1%. Here we go:

PREFACE
The headlines will have you believe Apple is dead and other than a handful of institutions like Goldman Sachs, RBC and Capital Market Laboratories (CML), Wall Street is yet again underestimating the demand for Apple's brand. But forget opinions, here is the simplest measure of the truth. We can do it together, and just skip Wall Street's bumbling.


iHONE SE
The recently announced iPhone SE is Apple's new "mini iPhone" priced at a mini price of $399, compared to over $600 for its larger phones. While the rest of the world, including Apple, followed the trend to larger phones and phablets, Apple realized there was a substantial demand for a smaller phone.

Before we get into the analysis from Wall Street, here's how you can get ahead of the curve on your own -- you don't need them to tell you their opinions, you have the power to find the facts yourself.

First, we went online Apple's store and right on the front was a push for the iPhone SE: 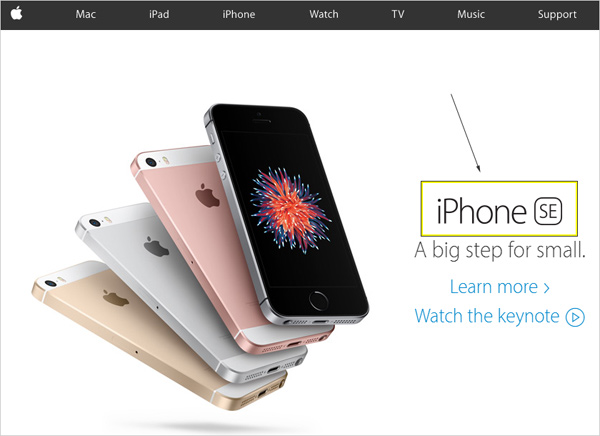 There it is, the iPhone SE is front and center. Next, we went to the nearest Apple store and tried to order an iPhone SE. Here's what we found:

The iPhone SE is out of stock -- with shipping times up to 3 weeks. We have done this several times and each time we find the same result. Demand is outstripping supply. Now, if we turn back to Wall Street we can see some of their analysis. First, from RBC in April:


“
Since it launched just over a week ago, the iPhone SE has seen demand outstrip supply.
”

And then there's main stream media -- Apple Insider, which reported on the iPhone SE:


“
Virtually all models with all carriers [are] out of stock at Apple's retail stores.

That note was also from the March / April period.

TEMPER EXPECTATIONS
A part of this supply vacuum likely comes from Apple's abrupt pullback warning it gave suppliers ahead of the most recent earnings report. So, to be fair, there is a constraint on supply that Apple has never really seen before, but this is self-created.

Having said that, the iPhone SE has been on a 2-3 week waiting period for the life of the product based on Capital Market Laboratories Professional (CML Pro) research.

WHAT IS NOT REPORTED
Sticking with headlines, we'll read that Apple is getting old -- less relevant to the younger generation and open to a new wave of competition. Well, that turns out to be a false narrative as well. Business Insider tells us that "teenagers are heavy smartphone users — many spend six hours a day on their phones — and Apple's iPhone remains their brand of choice." And then they wrote this:


“
Nearly 7 out of 10 teens surveyed by Piper Jaffray own an iPhone, and 75% percent said they intend to buy an iPhone as their next smartphone.

69% of teenagers surveyed are currently iPhone users. That's the highest interest in the iPhone among teenagers since at least 2013.
”

SMARTPHONE GROWTH
In general, while smartphone growth has been reported to be in decline, let's not lose the forest for the trees. By 2020, 6 billion people will own a smartphone. Today, there are just 2.6 billion.

Just so we're perfectly clear, that's 130% growth in five-years and it's coming from everywhere.


Eventually, every country will see that dark green color, which represents smartphone ownership, reach nearly 90%. With that growth we get another gem for Apple and that is Apple Pay.

APPLE PAY IS EXPLODING
As far as Apple being "just a phone company," how about this fact. Whether mobile payments sound exciting or not, the projection from Bank of America is that total transaction volume will reach $3 trillion by 2022.

Between the iPhone and the iPad, Apple controls 65% market share and even better, straight from Apple's December earnings report:


“
In the second half of 2015, we saw significant acceleration in usage, with a growth rate ten times higher than in the first half of the year.
”


Yes, the company reported ten times higher growth in six-months. This is a part of the substantial growth in "Apple Services," which has now become the firm's second largest business segment.

This is considered recurring revenue, rather than hardware sales -- which is one time revenue. Both CML Pro and Goldman Sachs have published reports on why this makes Apple stock substantially undervalued. But that's another story for another time.

WHY THIS MATTERS
There's so much going on with Apple it's impossible to cover in one report and reading headlines can be misleading. But, to find the 'next Apple,' 'next Google,' or 'next FANG stock,' we have to get ahead of the curve. This is what CML Pro does. Our research sits side-by-side with Goldman Sachs, Morgan Stanley and the rest on professional terminals, but we are the anti-institution and break the information advantage the top .1% have.

That chart plots the growth in 4G usage worldwide and how it will grow from 330 million people today to nearly 2 billion in five years. This is the lifeblood fueling every IoT and mobile device on the planet and CML Pro has named the single winner that will power this transformation. Then there's cyber security:

Thanks for reading, friends. The author is long Apple shares in his personal account.