The was originally published to news.cmlviz.com.

PREFACE
Technology and the stock market are now, more than ever, driven by an elite group of companies that are creating a new era in business where the leaders are both large and nimble, where pioneering businesses optimize revenue streams while simultaneously taking huge risks with time horizons measured in decades.

RESEARCH AND DEVELOPMENT
Not too long ago Apple was seen as a comany that spent little on R&D because it wasn't necessary. But there was always a lingering risk that the company would fall behind. While Wall Street will have us believe that the company has in fact fallen back, the reality is that Apple noted its need to spend more on innovation and it has seen the growth accelerate. 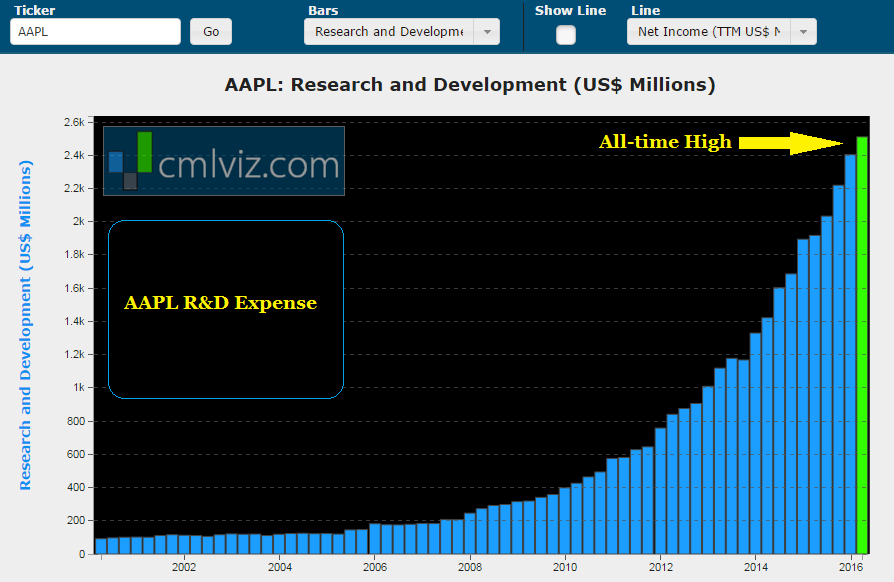 This chart goes quarter by quarter rather than rolling the time periods up into trailing-twelve-month periods. We can see that six years ago, Apple spent just $00 million on R&D. last quarter, the firm spent over $2.6 billion.

INNOVATION
With that spedning spree, beyond the normal suspects like the iPhone and iPad, Apple has brought to market the Apple TV, Apple Pay and likely the Apple Car. All three of those proucts are easily stand-alone businesses on their own. In fact, Apple Pay combined with the latest disruption that allows "touch and pay" on our laptops, phones and tablets is going after a $200 billion market.

Tim Cook, Apple's CEO, noted in the latest earnings call that Apple Pay was growing faster than ever, noting a 10-fold growth in just the last six-months. Apple's innovation and spending on R&D is back and the company will soon see the fruits of that labor.