The Social Media Surprise - Pinterest (NYSE:PINS) Has an Edge That May be Going Unnoticed

The Social Media Surprise - Pinterest (NYSE:PINS) Has an Edge That May be Going Unnoticed

Hello, all. This is Ophir writing. This is a snippet from a CML Pro dossier in May.

+ Pinterest has a unique space in social media in that it isn't particularly social and it exists as a virtual search engine for shopping.

* Social media advertising in selected key regions will grow from $99 billion in 2019 to more than twice that by 2023.

LEDE
Top Pick Pinterest (PINS) released its first ever earnings result as a public company and irrespective of a small sell-off, the company successfully crossed its first major hurdle and the important numbers were good. Also, it avoided the debacle that Facebook and Twitter faced in their early days -- this was a win, even if the stock price does not reflect it, yet.

Bullish Thesis
Pinterest has a unique space in social media in that it isn't particularly social and it exists as a virtual search engine for shopping. The social aspect comes from the nearly 300 million monthly active users each posting images and tagging their subjects -- these images are called "pins."

This is a fairly data heavy dossier and we prefer sharing data as charts -- so, get ready for a bunch of them, starting with this:

This is an estimated global social media advertising market through 2023 from our friends at Statista. 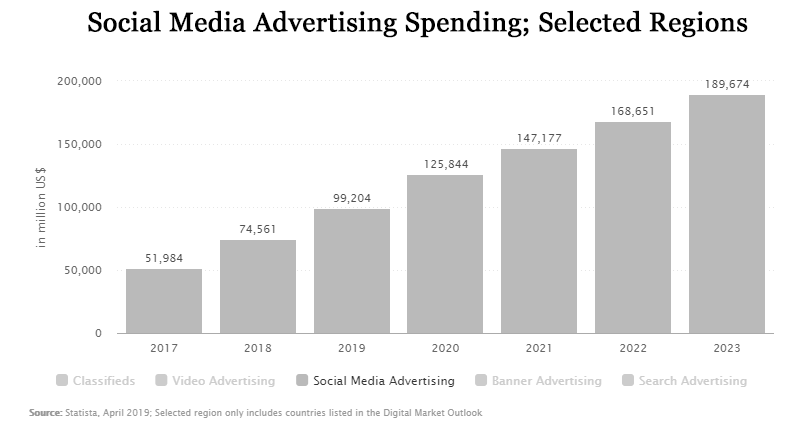 But to fully understand Pinterest and value its future as an attractive advertising venue, we have to compare it to what exists. Once we do this comparison, a careful eye sees a trend -- Pinterest may be smaller in monthly active users (for now) than many of the other competing brands, it has a unique space for e-commerce.

THERE'S SOMETHING HAPPENING
Let's look at some charts that move the needle.

First, only 27% of marketers worldwide as of January 2018 used Pinterest -- a far cry from its competition: 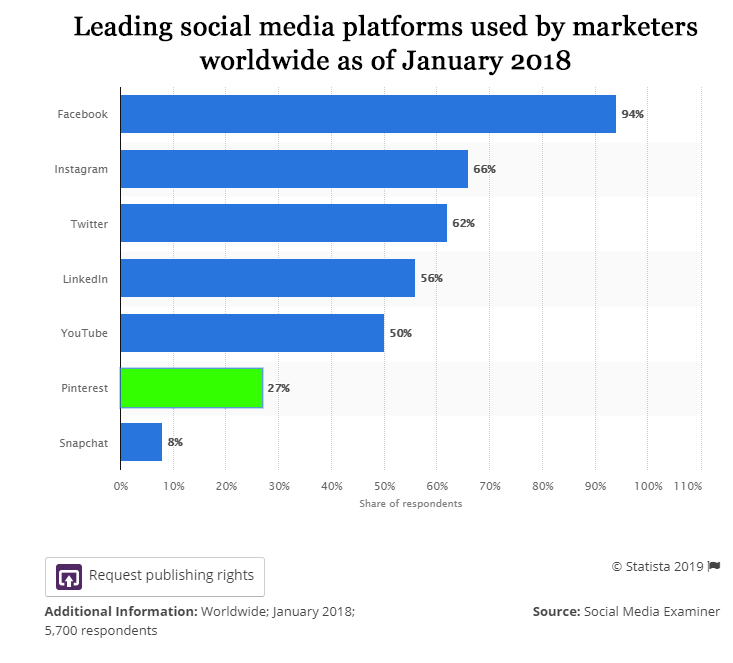 And, in terms of awareness in the United States, Pinterest is relatively low compared to the other social media: 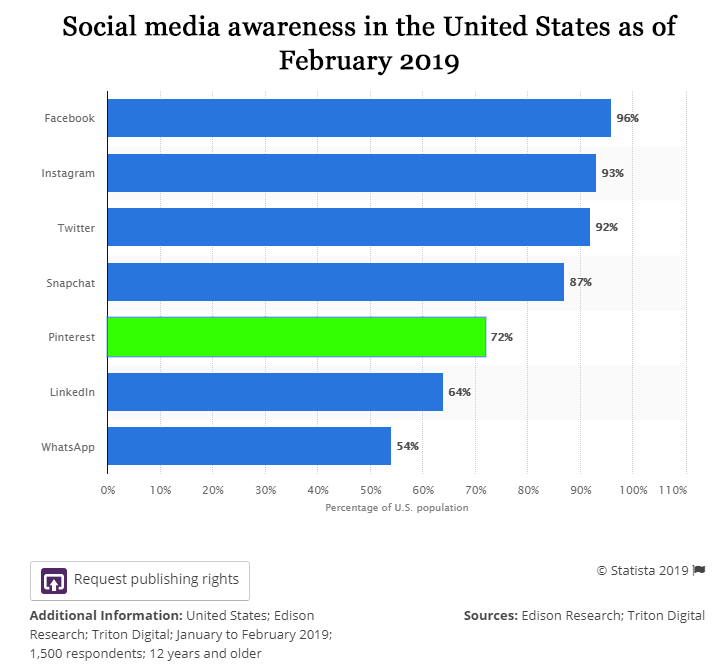 So far you might be thinking, "so, you're showing me this is a market laggard? I don't get it." That's what I thought, until I started really digging.

First, 87% of Pinners have purchased a product because of Pinterest. That is staggering. Next, we can look at a statistic which presents which shoppers in North America were most likely to turn for holiday shopping ideas and inspirations. 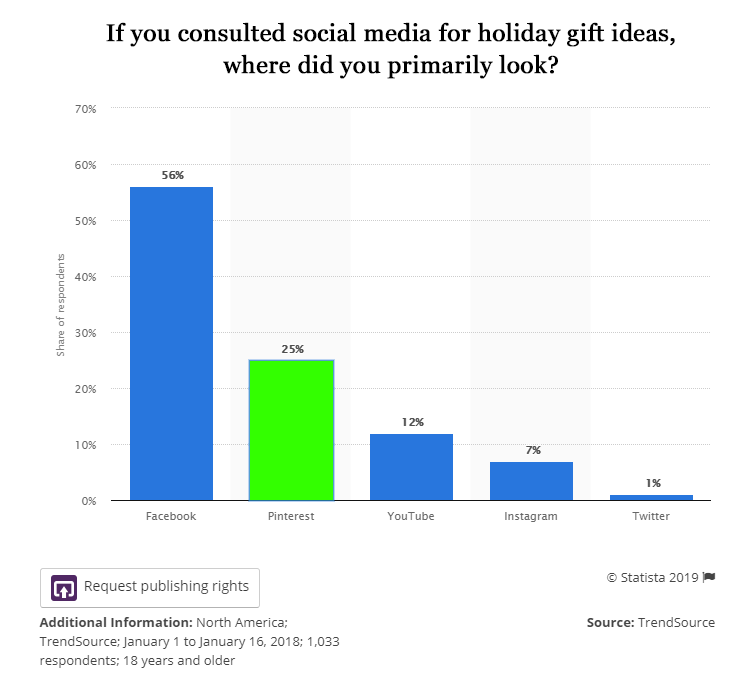 Then, I saw this: The Share of retail e-commerce traffic in North America referred by leading social media as of 1st half 2016: 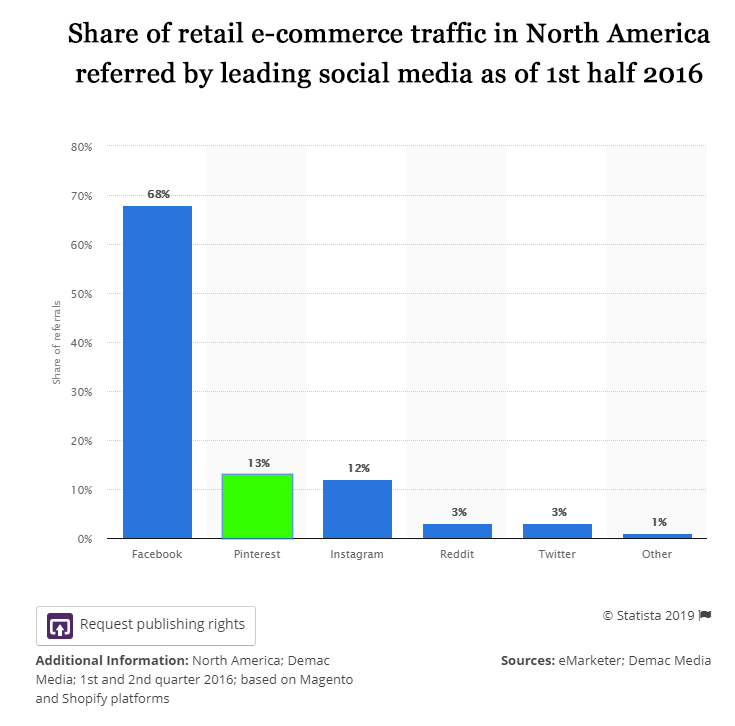 Next we looked at the percentage of U.S. internet users who use Pinterest as of January 2018, by annual household income. 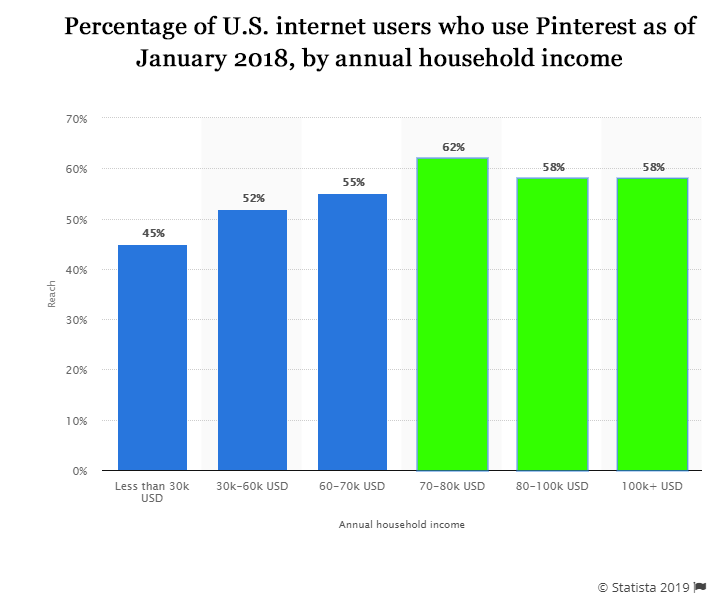 We can see that Pinterest users come from the highest three brackets in household income.

So, we have a story now:

* The global social media advertising market is set to double to nearly $200 billion.

* Awareness of Pinterest is low relative to other social media.

* Only 27% of marketers use Pinterest (yet) -- a staggeringly low number compared to peers.

* Pinterest is designed as a search engine for e-commerce -- but this ecosystem is built for people that don't know what they want, so a Google Search does no good -- they are looking for ideas. And, because of that we get the next two bullets:

* 87% of Pinners have purchased a product because of Pinterest.

* Other than Facebook, no other social media in the United States refers more people to shopping and plays a larger role in holiday shopping decisions.

Now, we can turn to some company specific details. We reprise that monthly active users (MAUs) chart, updated for this quarter. 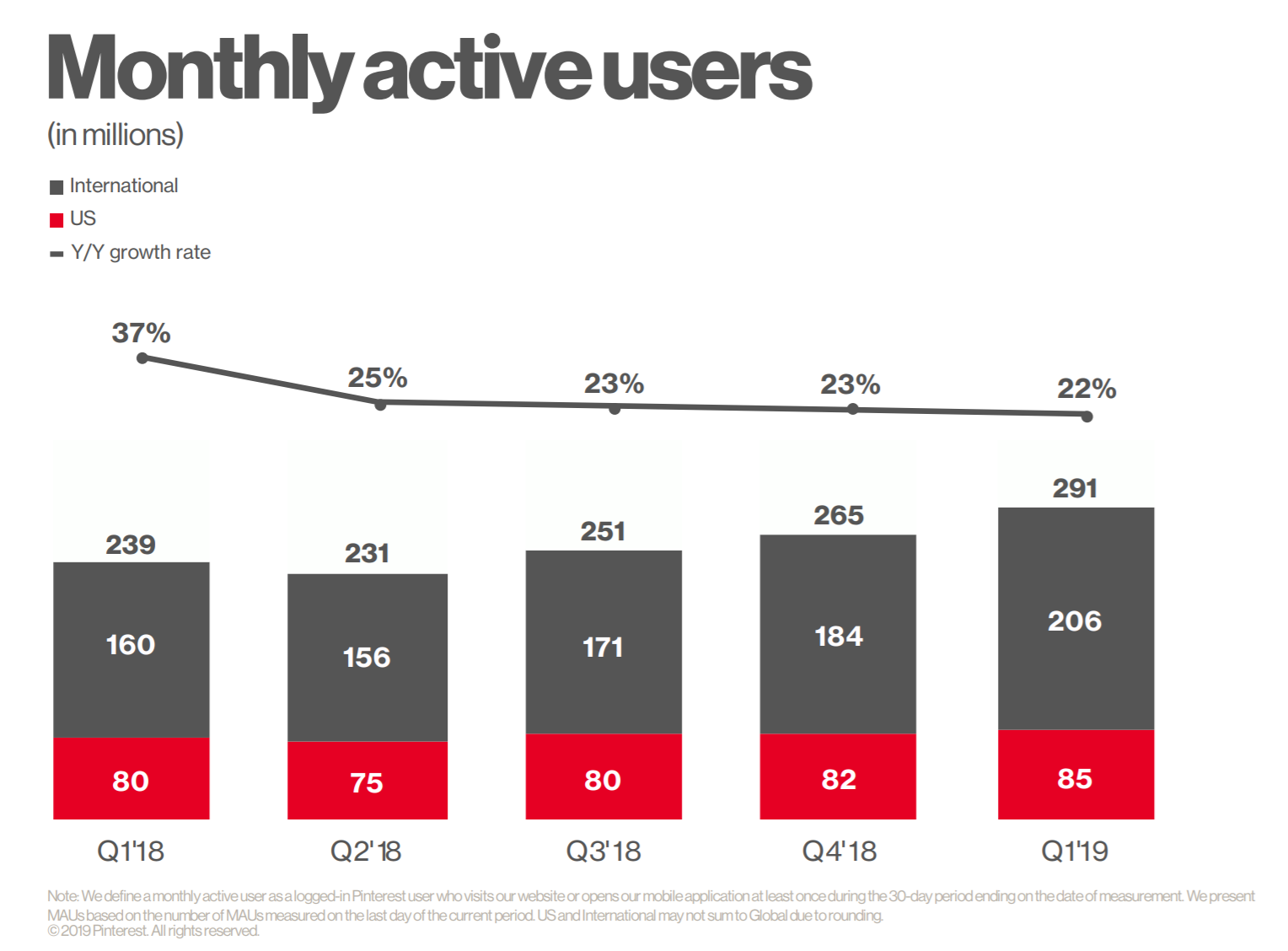 At 291 million MAUs, Pinterest is just behind Twitter's most recently available number of less than 330 million MAU. Note that Twitter has stopped reporting MAUs altogether, in a slight of hand that has fooled no one -- Twitter is shrinking. Sure, daily active users (DAUs) are growing for Twitter, but if MAUs are shrinking and DAUs are rising, DAU is a measure of engagement, not growth. 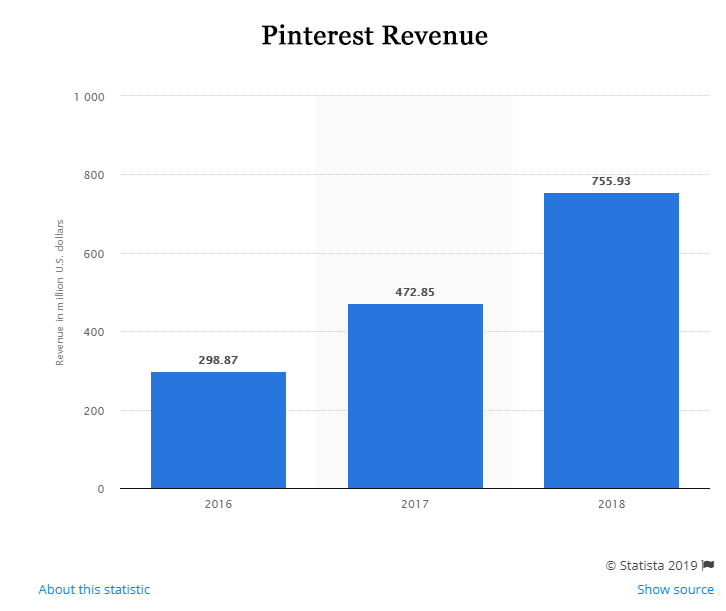 This revenue chart does not include the latest data.

The company is not profitable, yet, but losses are shrinking: 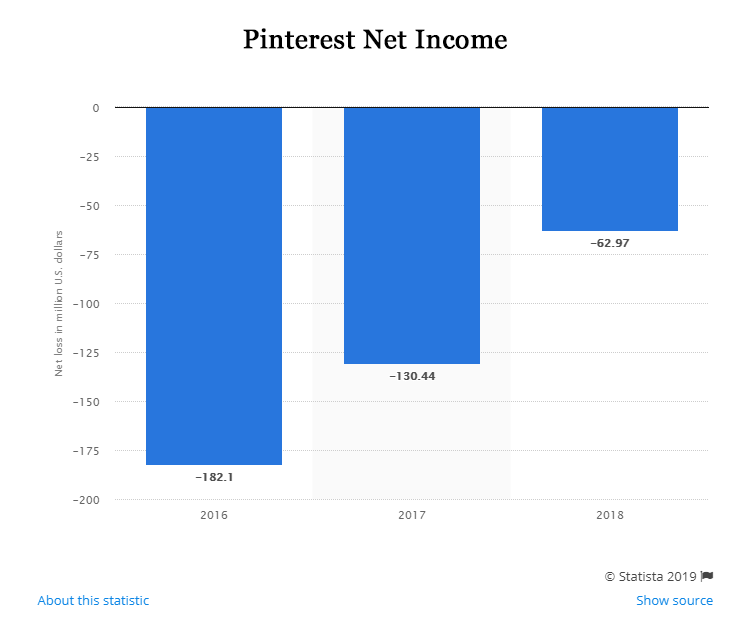 But there is so much more...

MORE, MORE
72% of Pinners use Pinterest to decide what to buy offline. In some data collected way back in 2015, we find that 93% of active pinners said they use Pinterest to plan for purchases.

Now, sure, that's old data, but if you look around the edges, then start tugging at them to look under the hood, Pinterest does in fact appear to have a special place in the social media world with no data disasters, no trolling, no fake news, and a lot of e-commerce.

S1
The form S1 reveals some more details about the company, both some good, and some risks:

The company has $641 million in cash. And, while the company has a five-year $500.0 million revolving credit facility, it does not have debt as I see it.

ONE LAST THOUGHT
Pinterest notes that "People often don't have the words to describe what they want, but they know it when they see it. This is why we made Pinterest a visual experience. Images and video can communicate concepts that are impossible to describe with words. We believe that Pinterest is the best place on the web for people to get visual inspiration at scale."

It's easy to miss, but Pinterest hasn't really turned into a video platform. Perhaps it never may, but it seems like a natural progression, and if it does so, it opens itself to the most dominant media Internet users consume in the world.

If the company cannot continue to show differentiation, it could be a disaster.

AND AN ODDITY - INTERNATIONAL

This last part is either really bullish, or impossibly bearish, we leave it for you to decide. First, this is how MAU growth looks in the U.S. and internationally:

But... This comes straight from the company:

But internationally, my goodness, that's simply awful. Yes, $0.05 to $0.08 is 60% growth, but the numbers are really low. So, if the growth in users is coming from a place where there is no revenue, we have a bad situation.

But, we know that growth from users is coming from international.

The explanation comes straight from the company:


We initially built our business with large CPG and retail advertisers in the United States who typically have large marketing budgets and had the greatest affinity for our core use cases at that time.

We then scaled our sales force to support these advertisers and grew their spend with us over time while broadening the mix of advertisers across verticals. As these advertisers scaled their investment on our platform, we have increased our focus on building the product and measurement tools required to serve mid-market and unmanaged advertisers.


It's a simple question and belief system you will need to answer: Do you believe Pinterest can monetize the international markets as other social media have or do you believe it somehow has such a niche offering that it cannot grow that to any real scale?

However you answer that question, even after all of the data we have presented, likely answers whether or not you like this company as a long-term investment.

For now, we'll take the rosier side of $0.05 growing to $0.08, and pluck the 59% growth number, and sort of brush under the rug that those results are somewhat based on small number math. There is a trend for international -- it's up -- let's stick with that.

THE FUTURE
It's understanding technology that gets us an edge to find the "next Apple," or the "next Amazon."

This is what CML Pro does. We are members of Thomson First Call (Refinitiv) -- our research sits side by side with Goldman Sachs, Morgan Stanley and the rest, but we are the anti-institution and break the information asymmetry.

The precious few thematic top picks, research dossiers, and alerts are available for a limited time at a 80% discount for $29/mo. Join Us: Discover the undiscovered companies that will power technology's future.

Thanks for reading, friends. The author is long Pinterest at the time of this writing and purchased shares on the date of publication.