It's Hidden in the Cracks, But: Google is Going After China

PREFACE
Even though it's locked out of China, Alphabet's Google (NASDAQ:GOOG) continues to grow its massive revenue base at border line alarming rates. In fact, here's the all-time revenue chart for a quick glance:

The same could be said for Facebook (NASDAQ:FB). In fact, here is that company's revenue chart: 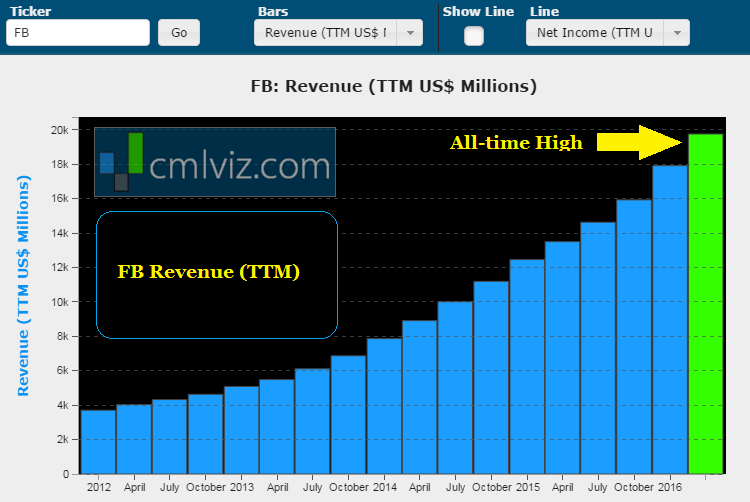 While Facebook and Google tear at each others' throats in one of the most aggressive competitive stances we have ever seen in mega cap technology, they actually do share common ground in one very big area.


CHINA
It's almost inconceivable, but unlike Apple (NASDAQ:AAPL) which generates over 50% of its operating income from China, neither Google nor Facebook have any access to the largest country by population and social media users. That's right -- Facebook's 1.65 billion monthly average users (MAUs) and Google's 3.5 billion searches per day are accomplished with 1.5 billion people totally locked out of their ecosystems.

But Facebook has been making overtures to China -- Mark Zuckerberg has dedicated himself to learning fluent Mandarin and China even threw Facebook a bone three days ago.


“
Facebook has won a Chinese trademark case against a company that registered the brand name "face book", in a sign that Beijing attitudes are softening towards the world's largest social networking site which is blocked to China's 700m internet users.
”
Source: CNBC

Of course, the trouble with China is censorship and that can render a search engine and a social media essentially useless, or so American companies would say. But if you follow Google's official blog every day, as we do, we saw a quiet but compelling story today. Here are some snippets:

We've talked with thousands of you in India, Indonesia, Brazil, and Thailand to learn what works and what doesn't— and today we're rolling out some big improvements.
”
Source: Google Official Blog

You'll notice that China is missing from that list, which is very much the status quo. But then we saw this:


“
Finally, we're adding Word Lens in Chinese. It's our 29th language for instant visual translation, and it reads both to and from English, for both Simplified and Traditional Chinese.

With Tap to Translate, improved Offline Mode, and Word Lens in Chinese, we hope you'll find the latest version of Google Translate a helpful companion. These updates are rolling out over the next few days.
”
Source: Google Official Blog

Now, any mention of China from either Facebook or Google is just tea leaf reading. It's so subtle it feels like a throw away. But this is not a throw away. Let's repeat one part of the section above. Here it is: "[Chinese is] our 29th language for instant visual translation."

Now Google didn't just all of a sudden run out of languages and realize, "well, we suppose we could go after the largest country in the world." It's never that unplanned at Google. In fact, the company is marvelously methodical, intelligent and pointed.

This isn't the game changer move -- it isn't an official appeal to China, it's not even in the headlines unless you're a CML Pro member (that's us). But I assure you, this wasn't a random event. Google sees what Facebook sees -- 1.5 billion people, 500 million of whom will be in the middle class by the year 2020 and 700 million Internet users as of today.

While Facebook and Google have wonderful growth trajectories ahead of them -- multiply it by 3-fold if China opens. And while it will take time and be hidden in the little seen acts like this, Google and Facebook are going to make a run for China again. That is a certainty. Today was one of many seeds being planted by the search Giant.

This is a long play, but one with an enormous upside.

SEEING THE FUTURE
There's so much going on with Google we can't cover it all in one report - it spans seven different thematic shifts in technology and it will battle Amazon, Facebook, Netflix and Apple for decades. It’s one of our “Top Picks” at CML. But, to find the 'next Google' or 'next Apple,' we have to get ahead of the curve. This is what CML Pro does. Our research sits side-by-side with Goldman Sachs, Morgan Stanley and the rest on professional terminals, but we are the anti-institution and break the information advantage the top .1% have.