PREFACE
Apple has earnings due out on Tuesday, January 26th after the market closes. It's a foregone conclusion that Apple's earnings and revenue growth in the near-term are in serious trouble. But, here's a different narrative and why Wall Street could be dead wrong, and they know it.


iPHONE:
iPhone makes up more than 60% of Apple's revenue, so this is where the hyper focus lies. In a poll from Fortune, analysts expected Apple to sell 76.6 million iPhones, breaking the all-time record from the quarter a year ago of 74.5 million.

Verizon has already announced that holiday-quarter iPhone sales were not as strong as the prior year and that the trend may likely continue in 2016.

But, the new iPhone 6s and iPhone 6s Plus were only on sale for a small portion of quarter ending in September, which means the pent up demand has rolled into the next quarter. Apple CEO Tim Cook actually told us this very fact:

"We exited the quarter with demand for our new iPhones exceeding supply, but we've made good progress with our manufacturing ramp in the initial weeks of October."
Source: Macworld


Tim Cook also said, "We recorded the highest rate on record for Android switchers last quarter at 30 percent." So, if we take that demand and push into the quarter ending in December, Apple likely sold closer to 78 million iPhones as opposed to the 76.6 million average analyst expectation.

The risks, as I stated on Twitter are currency impacts, which could totally erase revenue gains, and then the forecasts for this quarter.

iPAD
iPad revenue has been shrinking. Here's an all-time chart from Statista: 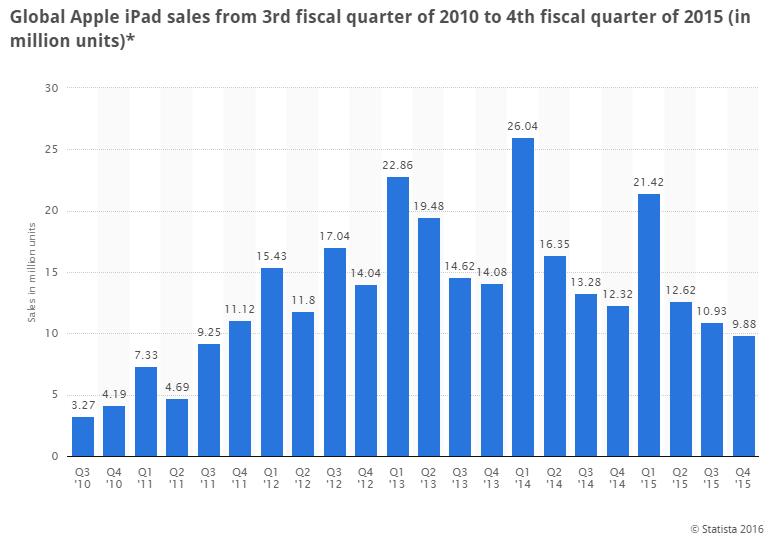 Sales have been tumbling. But, iPad Pro launched in November, which very well may reignite the product's sales. Tim Cook said:

"iPad Pro will enable a new generation of apps for entertainment and productivity, design and illustration, engineering and medical."
Source: Macworld


The argument for growth is rather simple, iPad sales have slumped because people weren't ready to upgrade. Enter the iPad Pro, stage left.

Watch for iPad growth for the first time in almost a year. Tim Cook is telling us it will happen. We just need to listen.

APPLE WATCH
So far Apple has not divulged Apple Watch sales explicitly, rather it bundles it in a category called 'other products.' The company reported $3.05 billion in the quarter ending in September, up from $1.9 billion in the same quarter a year ago. That's a 60% rise.

Most analysts are attributing this to the Apple Watch. Tim Cook said:

"Sales of Apple Watch were also up sequentially and were ahead of our expectations."


But more than that, a Wall Street Journal article noted that Tim Cook expected Apple Watch sales to boom during the holiday season.

Optimistic views for Watch come in at 6 million and pessimistic views come in at 2 million. Given Tim Cook's pretty careful language with respect to 'hype,' we see Apple Watch sales closer to the high end, or even a beat at 6.5 million Watch sales.

APPLE TV
Total year one results are expected to hit 25 million units, which is a colossal success. Based on the aggressive advertising campaigns, it appears Apple is pushing the product hard since it radically changes the firm into one with recurring revenue. An entire CML Pro dossier was published that expressed the explosive impact that would have on Apple's share price.

Regardless of an overall earnings beat or not, expect Apple TV to be a big part of the commentary in the conference call.

We break news everyday. Discover the Undiscovered.
Get Our (Free) News Alerts Once a Day.

MAC
We wrote an entire CML Pro research dossier on Mac and we disclosed that sales in the last four quarters have hit $25 billion. This product alone is larger than all of Facebook’s sales ($16 billion) and 35% of all of Google's revenue. Yes, the 'dead Mac' is 35% of Google.

And, while PC sales are down double digit percentages on the year, Macs are seeing 6%-10% growth. That’s right, Apple is starting to gain significant market share in the PC world.

There is a movement from Windows based machines to Macs, and it's simply fact at this point. The quarter ending in December saw the introduction of new iMacs. Estimates are coming in low for Mac sales in terms of growth because of the PC market slowdown -- watch for a possible beat here -- it could be sizeable.

TOTAL REVENUE
There's more that goes into Apple's revenue, including Apple Music and its software and services segment. All told, the estimates have come in at $76.7 billion while Apple's guidance is between $75.5 billion and $77.5 billion.

Tim Cook generally beats his estimates, and it would not surprise me to see the company near the high-end estimate of $80 billion.

In the CML Pro Apple research dossier we discuss the full line of Apple's remarkable innovation, including a 90% increase in research and development in the last two-years. Yes, although Wall Street claims Apple is a "phone company," the truth is, the largest company in the world may in fact be the most innovative of them all.

MORE
While Apple will likely beat estimates for the upcoming quarter, here's the real secret: It doesn't matter.

Wall Street will immediately turn to forecasts for the current quarter and those will likely be taken lower. Here's another secret: That doesn't matter either.

What Apple is doing with innovation, new products and a new enterprise changing revenue model is nothing short of revolutionary. Here's what does matter:

CONCLUSION
There is so much more going on with Apple it's almost impossible to keep it to one report. We wrote several seminal CML Pro research dossiers:

The Secret Handshake with India Just Changed Everything
Apple's Seismic Shift To Recurring Revenue Could Double the Stock
Research Is out: Apple Will Crush it in China for 2016

If we aren't in the know about these critical trends, then we're behind. Wall Street is certainly behind.

In the CML Pro full research dossier Apple Turns to Enterprise Changing Valuation, we discuss the seismic shift Apple is making toward a recurring revenue model and that means a radical shift in its valuation.

CML Pro sees it. Goldman Sachs sees it. It's just a matter of time before Wall Street sees it.